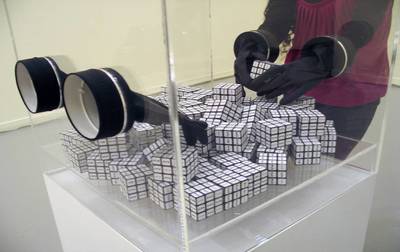 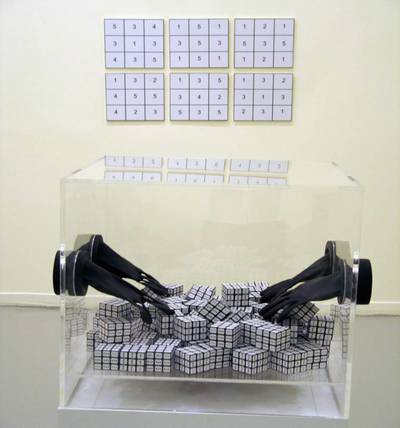 We can immediately sense mystery and excitement in this work, a complete marketing scheme for the Rubik Cube. The toy is very popular because it is close to the hearts of adults and stimulating to the minds of young people. This Pop/System art work, ever the attention grabber, rebels against order- it is at once both chaotic and systematic. It defies rationality and order. Being the symbol of minimalism, the cube encompasses both abstract and authoritative qualities. The simplicity of the numbers intermingles with symbols from nature and social systems, for all we do is act. The critical mind has limits that condemn us to failure whenever we try to aspire to anything beyond a rather loose grip on reality. The viewer always seems bound for a period of time.
The control that puts will between the palms of one's hands, as if it were a cynical joke, mocks the reality of knowledge systems and their credibility. The unity of control represents a sort of self deprivation as the viewer only depends on the sense of touch and little knowledge to control these systems. And although the work is related to construction, it has a popular, intellectual, behavioral, social, legal and physical context that is somewhat veiled.
The system of the work is comprehensive, including all six surfaces of the cube. It is therefore an oppressive regime that dominates all levels of the presentation, even forcing a certain posture and restricted hand movement- when inserted in the see-through box containing the cubes. Here, the viewer becomes part of the work, even an actor performing a role, following certain methods that they follow in their everyday life, within repetitive schemes that recur in all their activities, which are in turn related to one another through groups of chaotic systems.
However, following all that excitement and deprivation, the moment of joyous and a state of rather harsh conditional liberation is reached. Here, the harshness lies in the awareness that knowledge leads to a longing for ignorance.
Is commitment, then, commitment to order? Or is it commitment to that which is beyond order?